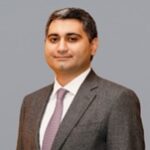 Zaur Gahramanov, born in 1982, graduated from Azerbijan State Economics University in 2002. Mr. Gahramanov received his master degree from the Univesity of Chicago Booth School of Business in 2016.

Mr. Gahramanov worked at Statoil in Norway as the Tax Advisor between 2004 and 2007 years, then he continued his career there as the Performance and Financial Analyst between 2007 and 2008 years.

Starting from 2008, Mr. Gahramanov continued his career as the Group CFO at SOCAR Trading S.A.

Mr. Gahramanov has began to work as the Deputy General Manager, at Investments Department at SOCAR Azerbaijan since January 2013 and as the CEO at SOCAR Turkey since April 2016.

He is also Member of the Board of Directors at SOCAR Energy Switzerland, SOCAR Trading S.A., Neftchi Professional Footbol Club, TANAP Natural Gas Transmission Company and Deputy Chairman of YASED.

Mr. Gahramanov is fluent in English, Russian and Turkish languages. He is married, and has three children.