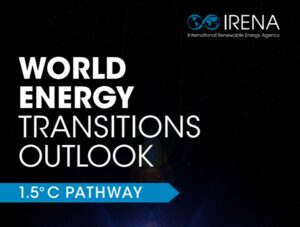 Holding the line at 1.5°C means reaching net zero by 2050 and ensuring a rapid decline in emissions beginning now. Countries around the world need to accelerate their efforts toward the energy transition without delay.

Despite clear evidence of human-caused climate change, widespread support for the Paris Agreement, and the prevalence of clean, economical and sustainable energy options, energyrelated carbon dioxide (CO2) emissions increased 1.3% annually, on average, over the period 2014 to 2019.4 While last year, 2020, was an outlier due to the pandemic, as emissions declined 7%, a rebound looks very likely, at least in the short term.

owever, the speed of the transition is far from what is needed to be in line with the Paris Agreement.Policies in place* will yield only global emissions stabilisation with a slight drop towards 2050 (as in the Planned Energy Scenario [PES]). However, if these policies are not fully implemented, emissions could potentially rise 27% over the coming three decades. Overall, the pace of future projections indicated in the Planned Energy Scenario falls far short of what is needed for a 1.5°C pathway. The time dimension is crucial, and a radical shift is required, starting today, based on readily available renewable energy and energy efficiency technologies that can be scaled up now. This Outlook outlines what is required for such a shift and presents an energy pathway that is consistent with limiting global temperature rises to 1.5°C – a pathway IRENA calls the 1.5°C Scenario (1.5-S).

The use of green hydrogen and green-hydrogen-based carriers, such as  ammonia and methanol, as fuels, would reach almost 2% in 2030 and 7% in 2050 from negligible levels today. In total, direct and indirect electrification would reach 58% of final demand.

The buildings sector would see the highest direct electrification rates, reaching 73% compared to 32% today. A rise would also be observed in the industry sector.

Green hydrogen can be produced at costs competitive with blue hydrogen by 2030, using low-cost renewable electricity, i.e., around USD 20/megawatt hour (MWh). If rapid scale-up occurs in the next decade, the cost of green hydrogen will continue to fall below USD 1.5/kilogramme (kg).

CO2 removal technologies, CCS, and related measures will be required for the remaining energy and process-related emissions.

Some emissions will exist by 2050 from the remaining fossil fuel use and from some industrial processes. There is thus a need for both CCS technologies that reduce emissions released to the atmosphere and for CO2 removal measures and technologies that, combined with long-term storage, can remove CO2 from the atmosphere, resulting in negative emissions. CO2 removal measures and technologies include reforestation and BECCS* and also, potentially, direct CCS and some other approaches that are currently experimental.

The CO2 produced from biomass is considered neutral to the atmosphere if the source of biomass is continually renewed as the biomass is harvested, for instance, in crop and forest cultivation. Because a crop or forest absorbs CO2 from the atmosphere as it grows and the CO2 emitted during combustion ends up back in the atmosphere, the overall carbon balance becomes neutral.

Bioenergy combined with CCS (BECCS) would play a key role in power plants, co-generation plants and in industry specifically for the cement and chemical sectors, to bring negative emissions in line with a very constrained carbon budget. BECCS would contribute over 52% of the carbon captured over the period to 2050.

Natural gas would be the largest source of fossil fuel in 2050 with a share in total primary energy supply dropping to 13% from 26% in 2018. In 2050, natural gas would primarily be used in power plants, industrial processes and for blue hydrogen production (coupled with CCS).

IRENA’s 1.5°C Scenario could be achieved with an additional USD 33 trillion over the planned investments, for a total investment of USD 131 trillion over the period to 2050 as shown in Figure 16. Over 80% (USD 116 trillion for the period to 2050 or around USD 4 trillion per year on average as shown in Table 1) needs to be invested in energy transition technologies (excluding fossil fuels and nuclear) such as renewables, energy efficiency, end-use electrification, power grids, flexibility innovation (hydrogen) and carbon removal measure.

The energy transitions at all levels depend on setting ambitious targets as part of a broad and comprehensive policy framework.

Off-grid solutions will play a major role in providing universal access to clean and reliable energy.

A broad set of policy measures is required to align the short-term recovery with longer-term transition, climate and socio-economic development objectives.

The economic, social and environmental outcomes of multi-systemic interactions taking place during the energy transition are evaluated using socio-economic indicators, including economic activity (gross domestic product), jobs and a comprehensive welfare indicator that includes economic, social (including health), environmental and distributional dimensions. These are fundamental to the rapid transition needed to stabilise global warming at 1.5°C. Triggering the required collaborative framework for all of society requires inclusive policies that can properly address concerns about fair and just outcomes, both within and between countries.

Further, there is a need to establish transparent, secure, sustainable and fair supply chains for critical materials such as copper, lithium, cobalt and platinum, and rare earth metals. At the same time standards and certification systems will be needed for green hydrogen and green commodities. On a human skills level, technical development and training programmes are crucial. International trade will remain a cornerstone of future sustainable development and with appropriate regulations, technology innovation can benefit all nations.

The energy transition is a multisystemic process that reaches far beyond the energy sector.