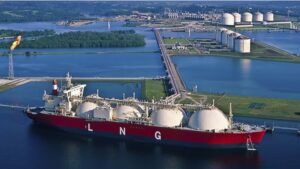 U.S. exports of liquefied natural gas (LNG) to China, Japan and South Korea, the biggest importers of the fuel, have surged to record highs in recent months as the heavily industrialised region recovers from the COVID-19 pandemic, Eikon trade data shows.

As with the ramp-up of U.S. oil exports that forced heavyweights like Saudi Arabia to find other buyers, what was dubbed Freedom Gas by the administration of President Donald Trump is also changing global energy flows and quietly gaining a stranglehold on key markets in Asia.

Graphic 1- US LNG Exports to Asia 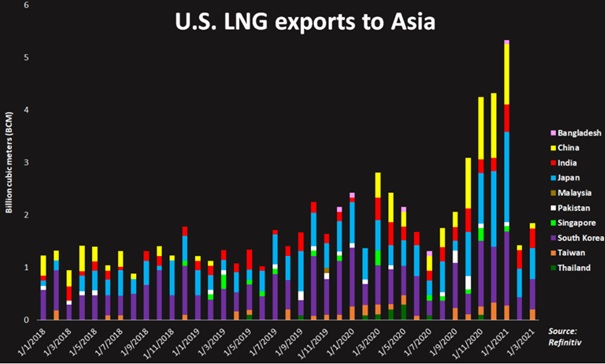 Such is the speed of growth of imports into Japan, the U.S. is running neck and neck this year with Qatar – a long-term key exporter to Japanese utilities – as a major supplier to the world’s third-largest economy, official data showed this week. That comes despite U.S. LNG being nearly 40% more expensive than Qatar gas on a per heating unit basis.

And more gas is on the way. Natural gas flows to export terminals in the U.S. where gas is chilled to -160 C (-260 F) before shipment overseas totalled 11.8 billion cubic feet (334 million cubic metres) on Wednesday, according to one source.

That’s a daily record and up from the daily average of 10.8 billion cubic feet recorded in March.

LNG shipments from the U.S. to Japan, China and South Korea totalled 3.2 million tonnes in February, almost two and a half times the highest monthly levels before the recent surge.

“The U.S. has got more export trains running so it is exporting more and demand has been relatively strong in northeast Asia,” said one long-time gas industry participant.

While March shipments of U.S. LNG into Asia have tailed off due to warmer weather they are still well above typical levels for the month, according to the Eikon data.

The export bonanza being experienced by the U.S. caps the completion of the first generation of export terminals that the shale gas revolution allowed.

A recent 2 million tonne annual supply deal with China’s Sinopec was priced at 10.19% of prevailing Brent crude prices, one of the lowest levels on record, according to the industry participant.

“I think American projects are now going to have to review their costs. The new projects will not be able to compete with the Qataris,” he said.