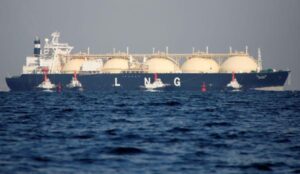 Qatar Petroleum, the world’s top liquefied natural gas (LNG) producer, is cranking up the pressure on high-cost rivals with bold expansion plans that will boost supplies over the coming decade and potentially push prices down further.

As competitors struggle to break even due to lower prices, the Qatari firm last month announced it will boost LNG output by about 40% to 110 million tonnes per annum (mtpa) by 2026 in phase one of its expansion of North Field LNG, the largest single LNG project ever sanctioned.

The company is expected to announce second phase expansion plans this year which will lift LNG capacity by 2027 to 126 mtpa, enough to meet the total import needs of both Japan and South Korea – the world’s top and third largest LNG importers respectively.

“With this decision, (Qatar) will once again reaffirm its dominance as the largest LNG supplier in the world,” said Chong Zhi Xin, a director at research firm IHS Markit.

This decision to move ahead has definitely crowded out other players. We anticipate that companies will need to take a long hard look at their projects to determine if they are able to find a competitive advantage versus this field of competition.”

Qatar, which accounts for a fifth of global LNG supplies, is already by far the lowest cost LNG producer.

Its breakeven price for a cargo shipped to top market Northeast Asia is estimated at around $4 per million British thermal units (mmBtu), compared with around $5 to $8 per mmBtu from Russia, Mozambique and the United States, said Alex Dewar, senior director at the centre for energy impact at Boston Consulting Group (BCG).

Australia pre-FID capacity breakevens are in the $7 to $11 per mmbtu range, he added.

“It’s going to be hard to compete with them at these prices, so what the other sellers might be able to compete on is offering more flexibility,” a source with a competing supplier told Reuters on condition of anonymity as he was not authorised to speak with media.

For instance, Qatar Petroleum typically sells its cargoes on a delivered ex-ship (DES) basis, which makes it difficult for buyers to re-direct cargoes if they suddenly don’t need them. So competitors who do offer on-selling or offer options enabling buyers to cancel purchases within a specified period might win business.

Qatari volumes into Northwest Europe are also expected to rise, after Qatar in the last year secured regasification capacity at terminals at the Isle of Grain in the United Kingdom and Montoir in France, said Wood Mackenzie’s Giles Farrer.

For other suppliers, Qatar’s aggressive marketing may not be good news, analysts said.