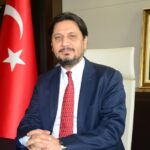 He was born in 1979 in Mersin Anamur. He graduated from Middle East Technical University Electrical-Electronics Engineering Department in 2002.

He started his carrier at Baskent EDAS, in 2003. After working at Başkent EDAŞ for 5 years, he worked at TEDAŞ Project-Facility Department between 2009-2011.

Ulutaş was assigned as the Vice President of EMRA on September 20, 2018. He is married with two children.