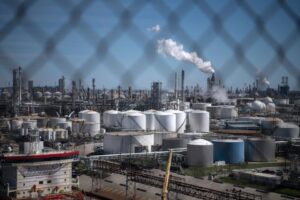 The momentum behind carbon capture, utilization and storage (CCUS) as a business opportunity with obvious synergies to the oil and gas industry continued to build this week, as ExxonMobil XOM +0.5% rolled out an ambitious, $100 billion proposal for a massive carbon capture and storage program to be centered in Houston and offshore saline reservoirs in the Gulf of Mexico. Initial response to the plan from officials in Houston was positive.

ExxonMobil promotes the plan as one that would help Houston and the country achieve objectives related to the Paris Climate Agreement, as well as Houston’s commitment to achieve net-zero carbon emissions by 2050. Mayor Turner appeared to agree. “This proposal by ExxonMobil is the type of bold ambition and investment we will need to meet our climate goals and protect our communities from climate change,” he said on Tuesday. “ExxonMobil’s proposal represents a significant step forward for the energy industry, and I hope it brings more companies to the table to help Houston lead a global energy transition.”

It’s the kind of plan that only a company of ExxonMobil’s size, experience and internal expertise could hope to undertake. Joe Blommaert, President of ExxonMobil Low Carbon Solutions, in an interview Wednesday, told me that the company’s 30+ year experience in the CCUS realm, during which time it has accounted for 40% of all of the CO2 that has been captured by mankind, makes it uniquely situated to execute such a plan. “We do believe we have the necessary operating experience of running carbon capture,” he said. “We have the geo-science and other critical skills within our company, and we have the proven capability to execute very large projects and managing large capital investments.

Guy Powell, Vice President of Planning and Business Development for the Low Carbon Solutions group told me, “The U.S. Gulf Coast endowment is incredible. The estimate of total available capacity is roughly 500 billion tons of storage capacity in the Gulf of Mexico, if you look at the region from New Orleans all the way down to Corpus Christi.” That’s enough capacity to accommodate hundreds of years’ worth of the plan’s goal of sequestering 100 million metric tons of CO2 per year once it is fully online.

Exxon’s vision is to source that CO2 from the 50 largest industrial emitters in the Houston area, a plan that would go a long way to helping the city achieve its net-zero carbon goals. But even working in partnership with the city, state and federal governments, Exxon believes it is a plan that would of necessity involve many other industry participants besides itself. The plan would also require the creation of a regulatory framework at all of these levels of government in order to be successful. That itself presents a huge challenge, especially given that the Biden/Harris administration appears to have de-emphasized support for CCUS, at least in its initial proposal on infrastructure legislation.

Another big challenge will come from opposition from the green lobby, which seems to just knee-jerk in opposition to any proposal from the oil and gas sector.

The company firmly believes the world needs big, bold CCUS projects such as this one if it ever hopes to achieve its Paris Agreement goals. As Blommaert puts it, “This is not a question of ‘or’. Society needs all available solutions to meet the Paris goals. That is recognized by the International Energy Agency and the Intergovernmental Panel on Climate Change. This is particularly true for these hard-to-decarbonize sectors that have a lot of heat requirements, a lot of heat flow requirements. There is no technology readily available at scale that can decarbonize those activities, which are fundamental, and are manufacturing day-to-day products that society needs.”