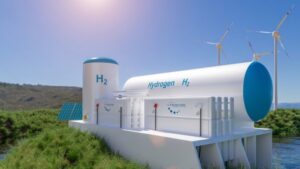 European energy ministers have highlighted the need to create a stable regulatory framework for hydrogen in the European Union, capable of attracting private investors into a competitive and predictable market. Speaking at the conference “Hydrogen in Our Societies – Building Bridges” on Wednesday (7 April), a number of national politicians expressed the same point.

“Public and private investment should ally, and governments have the responsibility to give the right signals, creating the regulatory framework and conditions for the private sector to invest with stability and predictability,” said Portugal’s minister of environment and climate action, João Pedro Matos Fernandes. Along the same line, Dutch minister of economic affairs and climate policy, Bas van’t Wout, also highlighted the importance of mobilising public sector investment, which he said would be crucial for implementing the European strategy for hydrogen as a key element in the decarbonisation of sectors of the economy where other alternatives “may not be viable or be more expensive”.

Meanwhile, Elisabeth Winkelmeier-Becker of the German federal ministry of economic affairs and energy said that besides the regulatory framework, it was also crucial to plan the necessary infrastructure for the production and distribution of hydrogen (obtained through the electrolysis of water, which separates oxygen from hydrogen).

Spain’s secretary of state for energy Sara Aagesen Muñoz added that it was time to accelerate investment and political decisions, laying the foundations for a stable investment. Claude Turmes, minister of energy and spatial planning of Luxembourg, focused on transparency to attract private investors. “We need a transparent system because private investors will only be interested in moving forward if there is transparency”, Turmes said, emphasising that reducing the cost of electrolysers as one of the most important issues for the future of hydrogen. Euroactiv