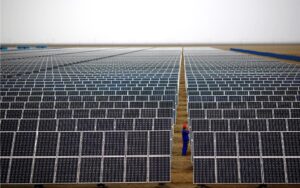 China’s goal to become carbon neutral in 2060 will require $6.4 trillion of investment in new power generating capacity, leading to a tectonic shift in manufacturing and commodity imports while boosting its energy security, consultancy Wood Mackenzie said on Thursday.

China has been grappling with rising oil and gas import dependency while facing increasing geo-political tensions that threaten its energy security.

Its plans to shift to renewable energy would greatly enhance its independence from foreign energy sources while ensuring that the energy transition is stamped “Made in China”, Wood Mackenzie’s analysts Huang Miaoru and Zhou Yanting said in a report.

“China’s dependence on hydrocarbons proves a hard habit to break, but the pursuit of carbon neutrality makes it possible,” they said.

Oil demand in the world’s largest importer could fall by half by 2040 compared with its base case, and nearly eliminate the country’s need for the fossil fuel by 2050, they said, enhancing its energy security.

Without carbon-reduction goals, China’s oil-import dependency would exceed 80% by 2030, while half of its natural gas supply would be imported, Woodmac said.

“If China can replicate its current global market share in battery and solar-panel production across the entire future value chain of clean energy, it would transform global energy supply, trade and industry,” Zhou said.

“Just as the rest of the globe will need China to help it decarbonise, China will need others to support its transition.” Reuters