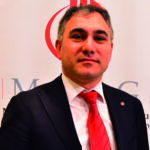 Bülent Şen is originally from Kars and was born in 1970 at İstanbul, Fatih. He graduates as an Electrical Electronic Engineer in 1990 from Firat University and he get employed right away at ABB transformer as an energy engineer. Between 1991 and 1995 he worked as the area manager at Aktaş Elektrik (AYEDAŞ) in the following years from 1995 to 2004 he worked at İGDAŞ in different departments and ranks eventually ending his experience there as the Anadolu Area Vice Manager. In 2004 he continued his carrier at Bursagaz, which had been recently acquired by EWE from BOTAŞ, as Chief of the Sales and Marketing department. In 2009 the natural gas company İZGAZ was passed on to ENGİE from the Koaceli Metropolitan Municipality, at this time he was employed there as the Assistant General Manager, he still continues to work at İZGAZ as the Regulatory Communication Director. In 2012 he founded his own Energy Company named GEP Enerjı where he pursues energy projects ( Renewable energy, regulatins, fossil fuels and electrical and natural gas operations). In 2018 he gets chosen as an assembly member at the Istanbul Chamber of Commerce (İTO), parallel to which he also works there as the Vice Chairman of İTO’s Energy Committee. He is also part of the executive board of the Energy Efficiency Association (ENVER) with the position of General Vice Chairman. As a member of the Turkey Energy Summit he also writes articles for the Gas and Power newspaper which is part of the Turkey Energy Summit. He was recently chosen as the Science, Advanced Applied Technology and Research Centre (BİLTAM) consultancy member at Medeniyet University. He is currently a member of the Fenerbahçe Congress, the Sarı Lacivert Association’s Board of Directors and the KIZILAY General Assembly. Bülent Şen also speaks English, he is married and fathers two children.