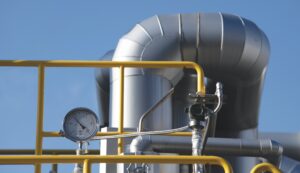 The uptick in interest in the technology comes as many governments and companies have set their sights on reaching net-zero emissions by the middle of the century. To achieve that goal, they’ll have to find ways to decarbonize the hardest-to-abate sectors, such as heavy-duty trucking, marine shipping, and industrial manufacturing. Hydrogen increasingly looks like the answer because it’s a versatile, zero-carbon fuel, so long as it can be produced without emitting carbon.

“Twenty years ago, when people were talking about hydrogen, almost exclusively people were talking about use in light-duty vehicles. Today, people are talking almost exclusively about everything else,” said Julio Friedmann, a senior research scholar at Columbia University’s Center on Global Energy Policy. “Hydrogen is the Swiss Army knife of decarbonization,” added Friedmann, who served as the principal deputy assistant secretary for the Energy Department’s Office of Fossil Energy in the Obama administration.

For example, hydrogen can be used in a fuel cell to power a heavy-duty truck. It can be converted into ammonia, which can then be used to fuel a cargo ship. Hydrogen can be blended into natural gas and run through a gas turbine to generate electricity. It can serve as a replacement fuel for steel, cement, chemical, and other manufacturing plants that can’t be easily electrified. Hydrogen can even store energy, acting similar to a long-duration battery to provide power to the grid when renewable energy is in short supply. The challenge, however, is scaling the technology. To do so will require a concerted policy effort to help drive down the costs of producing carbon-free hydrogen, according to energy analysts and industry representatives.

“In terms of the policy environment, hydrogen is a little bit of a blank slate, which is a challenge and an opportunity,” said Paul Wilkins, senior director of federal government relations for Bloom Energy, which manufactures fuel cells and electrolyzers. “We’d love to see the administration put together a national hydrogen strategy.” Even so, Biden’s proposals thus far pale in comparison to comprehensive hydrogen road maps that other countries, such as Australia and Chile, are putting into place.

The European Union, as part of its European Green Deal, is investing massively in hydrogen, with an aggressive goal of deploying 40 gigawatts of electrolyzers, which are used to split water into hydrogen and oxygen, by 2030. That government commitment to support hydrogen is already driving private investment. Cummins, for example, is already helping run hydrogen-powered trains in Europe, said Traci Kraus, the company’s director of government relations.

These other countries are focusing on hydrogen not only to decarbonize their own industries but also to take advantage of a future export market. Japan, which doesn’t have many energy resources of its own to extract, is planning to rely heavily on hydrogen as a replacement fuel in nearly everything, including vehicles, power plants, and industrial manufacturing, which Friedmann said creates a new market pull for the fuel. Other smaller Asian nations, such as South Korea and Singapore, are soon to follow. Right now, Japan is working with Australia, which could provide much of its hydrogen, but hydrogen advocates see an eventual opportunity for the United States to supply hydrogen abroad, if the federal government commits to support the technology.

The U.S. currently produces 10 million tons of hydrogen each year, one-seventh of the global supply. Roughly half of that hydrogen is used in oil refining, and most of the other half is used in fertilizer production. Already, there are a few thousand miles of hydrogen pipelines in the U.S. in the Gulf Coast and California, largely connecting oil refineries.

That scale, however, is far insufficient to what energy analysts and industry representatives have said will be needed in a net-zero emissions world. That developing market for hydrogen is large, “somewhere on the order of a gigaton of hydrogen,” said Jonathan Lewis, senior counsel and climate specialist at the Clean Air Task Force. In addition, most hydrogen in the U.S. today is produced from natural gas by exposing methane to high-temperature steam.

Decarbonizing hydrogen production requires installing carbon capture equipment to those natural gas operations, known as “blue” hydrogen, or creating hydrogen using renewable energy. The latter “green” hydrogen is produced by using renewable energy to power an electrolyzer, which splits water into hydrogen and oxygen. Both low-carbon hydrogen production methods, however, remain too expensive to be widely commercialized, as the costs of carbon capture equipment and electrolyzers are high.

The Energy Department sees an opportunity for the U.S. to increase its hydrogen production capacity by two to four times, said Sunita Satyapal, who directs the Hydrogen and Fuel Cell Technologies Office in the Energy Department’s Office of Energy Efficiency and Renewable Energy.

Satyapal said the department recently launched a consortium and research effort dedicated to driving down the cost of electrolyzers. The Energy Department is aiming to cut the costs of green hydrogen production by two to three times, making it competitive with hydrogen produced from natural gas without carbon capture.

The Energy Department has already been launching some hydrogen production pilot projects, and it is exploring pilot projects for various end uses of hydrogen, including a data center, marine shipping, steel manufacturing, and heavy-duty vehicles, she said.

Natural gas companies also see hydrogen as an opportunity to repurpose their existing infrastructure, avoiding stranded assets and lost jobs. Low levels of hydrogen can already be blended into the natural gas supply and transported through existing gas pipelines.

Share
Previous Lithium Prices Could Triple As EV Production Soars
Next Another April Day, Another ERCOT Warning About Inadequate Supply