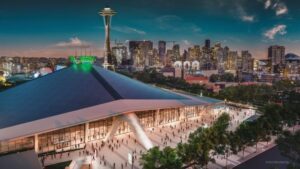 Jeff Bezos has committed to making Amazon net-zero carbon by 2040, and plans for a Seattle arena are part of reaching that emissions goal and will be the first net-zero carbon arena in the world. The Climate Pledge Arena joins other sports stadiums and large event venues, like Mercedes-Benz Stadium in Atlanta, that have been designed with renewable energy technology. Incorporating energy-efficient technology, including updated lighting and HVAC systems, along with solar power, can reduce operating costs for venues. In Europe, the use of renewable energy to power stadiums is becoming increasingly commonplace, specifically for football. The Stade de Suisse Stadium in Bern, Switzerland and the Allianz Riviera stadium in Nice, France, among several others in the Netherlands and Germany, are ranked within the top 50 stadiums utilizing renewable energy, according to a list from Solar Asset Management in Europe. CNBC