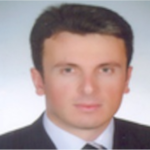 Having completed his undergraduate studies at the Faculty of Law of Ankara University, Mr. KURT completed his master’s degree on the Turkish International Vessel Registry. He is currently working on his doctoral thesis.